AirPlay allows you to mirror your computer screen to Apple TV and stream audio to supporting devices.

If you have an Apple TV or speaker that supports AirPlay, you can stream audio from your Mac by selecting them from the list.

Additionally, you can create Siri Shortcut to use Siri to switch audio from your Mac to other devices or utilize Timer functionality for scheduling it.

To turn Screen Mirroring ON, tap on the device to which you want to mirror your Mac screen from the list. To turn it OFF, tap on the same device again.

As with sound, you can use Siri or Timer for Screen Mirroring.

Screen Mirroring has two modes: Mirror or Extend, where Extend means creating a separate display. You can switch the mode on your Mac or by refreshing the list of devices after enabling Screen Mirroring. 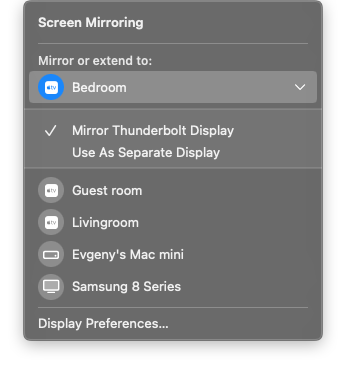 For the app to be able to control AirPlay on your Mac, your Mac must be unlocked.